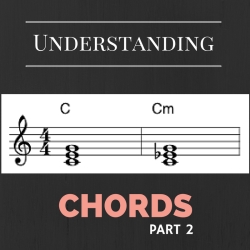 This post is part two in our series on chords. It covers major chords. Part one covers intervals – the building blocks of chords.

The goal of this post is to help you be able to:

And to help solidify these ideas, there’s a short written quiz (which includes writing out a few major chords on the staff – with an understanding of how each element is structured).

Examples are presented here in the context of reading and playing for piano – though you should find the info helpful, regardless of your instrument. (Piano is a great tool for mapping things out. If one is able to recognize the letter names of the piano keys, the keyboard really helps with visualizing music theory.)

And just to recap a few points from Part 1, Intervals:

Major, minor, augmented, and diminished chords are sometimes called triads. A triad is just a three-note chord, with an interval of a third between each of the notes. (If this idea is new to you, it’ll make more sense in a few paragraphs!)

The three notes in a triad are called the root, third, and fifth. Let’s go over these – and create a triad – one note at a time:

The third in a triad (for example, in a major chord) occurs an interval of a third above the chord’s root – hence, its name. In a C Major chord, the note E is the third.

C and E – the root and third of a C Major chord:

And here is how those five notes will look, moving upward on the staff:

This is a good way of understanding roots, thirds, and fifths. (Stick with me if this is confusing; it should make complete sense in a few minutes.)

Sometimes, in music theory classes, we’re taught to sing the three notes of a chord (the root, third, and fifth) as “1, 3, 5.” Here’s an example of that.

In the audio file below, I’m singing the three notes of a C Major chord (the C, E, and G), from bottom to top; and then back, from top to bottom. Instead of singing, “C, E, G, E, C,” I’m singing, “1, 3, 5, 3, 1.” You might feel like singing along. Singing intervals in this way – and learning to match our pitch with each of the notes – helps deepen our understanding of intervals and chords:

The fact that a triad is a series of three notes (the root, third, and fifth), each spaced by intervals of thirds, leads some theorists to describe triads as “stacked thirds.”

When we see a major chord on the staff (or a minor, augmented, or diminished chord), we can really see the “stacked third” nature of these kinds of chords:

This stacked third “look” of three notes on the staff is always a sign that we’re seeing a chord – a triad (a major, minor, augmented, or diminished chord).

Seventh chords, which we’ll cover later in this series, are simply four notes stacked up by thirds – so, they also have this same look:

More to the Story

And, even when a chord occurs in a more complex form (known as a different “voicing” of the chord), we often still see elements of stacked thirds within the more complex voicing. The voicing below is a C Major chord, represented with five notes. The notes (from bottom to top) are the root, fifth, root, third, and fifth:

One quick aside – because some of this terminology can be confusing:

Even though we’re using the word, “third,” in both cases, these are two different things.

So it’s good, when hearing the word “third” in the context of music, to distinguish whether it’s referring to:

Wow, so many things!

Here are the four half steps between C and E – the bottom two notes in the chord: (Playing these on the piano can help us to see and get a feel for the half steps as well.)

And here are the three half steps between E and G – the top two notes in a C Major chord:

A major chord is the archetypal, happy- or standard-sounding chord in music. It sounds like this:

(We haven’t covered this yet, but in harmonic analysis, the chords above would be described as IV, V, and I chords in the key of C Major.)

When the root, third, and fifth of a chord are played together/at the same time, this is often called a block chord – with “block” sort of describing how the chord looks, with the notes all written directly up and down from each other on the staff.

The sound examples of the major chords above are block chords. And here’s how a block chord looks on the musical staff:

A broken chord occurs when notes of a chord begin at different times. The classic example of a broken chord (seen quite a lot in piano music) looks like this – where one note (often the chord’s root) occurs by itself; and the other two notes of the chord (the third and fifth) occur together on a different beat:

And here’s how the broken chord above sounds:

Arpeggio is a familiar word, but one that’s not often defined. An arpeggio is just the notes of a chord (for example, in a triad, any combination of roots, thirds, and fifths) occurring one at a time. (An arpeggio is a specific type of broken chord.)

Here’s the most basic form of an arpeggio, shown on the staff (and heard in the sound sample) below:

In these examples, I’m using the piano’s damper pedal – so you can hear the notes sustain. (Arpeggios tend to sound nice this way.)

And here’s an arpeggio that’s slightly more complex. In the example below (the staff and recording), the notes (from bottom to top) are root, fifth, root, third, fifth:

Block chords, broken chords, and arpeggios occur in music in almost unlimited ways. The examples above show the basics. But, in a piece of music, we encounter all sorts of interesting variations and blendings of these three chordal structures. (Well-written music often combines various of these “building blocks” in creative and thoughtful ways.)

When we create a C Major chord (a major chord whose root is the note, C), we don’t need to add sharps or flats to any of the notes in the chord. This is why C Major chords are often used in musical examples – it’s a simple chord to study. (The pattern of four half steps between the bottom two notes (the root and third), and three half steps between the top two notes (the third and fifth), occurs with all natural notes: C, E, G.)

However, when the root of a major chord is a note other than C, sharps or flats sometimes have to be added to various notes in the chord, in order to maintain the pattern of four half steps and three half steps that’s characteristic of major chords.

An aside: The tricky thing to remember is that there’s no sharp or flat – no black key on the piano – between B and C, or between E and F. So, B to C is a half step; and E to F is a half step:

Ok, back to building an E Major chord. You can grab a pencil and some staff paper (or print some for free), and try this, too.

One little trick that’s helpful to know is that, because the notes of major, minor, augmented, diminished, and seventh chords occur in intervals of thirds:

Chords, in their most basic form (in what’s usually called root position) will look like the above. We’ll plan to cover more about chords in their various forms (like different “inversions” and “voicings”) later in this series…

You can sign up to the Email Newsletter if you’d like to be notified when new posts in this series are published. There are also some freebies in the works for subscribers – and you’ll receive links to those as they become available.

Please feel free to contact me if you have any questions about chords. (I love talking about this stuff.)

If you live in Seattle, I’m also available for private lessons in piano, music theory, and composition. Let me know also if you’d happen to live elsewhere and have an interest in Skype lessons. It’s something I’m just trying out. Feel free to contact me to talk more.

Below is a quiz, in case you’d like to test your skills. The Answer Key is here.

With music theory, it’s often helpful to answer some questions – where you’re asked to do things like write out specific chords on the musical staff. It forces us to go through the steps and remember the details.

If you’re finding this series helpful, I’d encourage you to answer some or all of the questions below. It’s a helpful way of reinforcing the ideas.

Here’s some free staff paper – a pdf you can print. And here’s one of my favorite staff paper notebooks (made by Hal Leonard) on Amazon.

Federal Trade Commission (FTC) Disclosure: The link to Hal Leonard staff paper above is an affiliate link – where I make a small commission, at no cost to you, if you click and then buy. #CommissionsEarned

You might find it helpful to use staff paper, and to find and play these notes/keys on a piano, to help figure out each answer.

Part 4: Identifying Chords on the Staff

The section below contains various major chords on the staff. Each appears as a Block Chord, Broken Chord, or Arpeggio. For each chord, write:

One sample question is answered as an example:

Part 5: Writing Chords on the Staff

Write each major chord below with whole notes on Treble Clef. Write each as “stacked thirds” – showing the root, third, and fifth as either “Line to Line to Line” or “Space to Space to Space.” (Note: Accidentals – i.e., sharps (#) and flats (b) – are drawn just to the left of the note they’re applied to.)

Write the three chords from Part 5 again – this time, in Bass Clef rather than Treble Clef.

Well done! (Music theory is pretty fun and interesting, huh?) You can double check your work with the Answer Key, here.