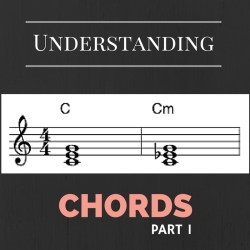 This post is part one in a four-part series on chords.

To understand how major, minor, and other chords are constructed, it’s helpful to look at the fundamental building block of chords: intervals – in particular, half steps (minor seconds) and thirds (both major and minor thirds).

Let’s cover each of these, and then combine them to create some chords.

I’ll try to be somewhat comprehensive, so feel free to skip over any sections and just grab what you need. (You can also skip down to the quiz at the bottom of this post.)

Definition: An interval is the distance between two notes.

An analogy is that an interval is like a unit of measure – like a centimeter or an inch. And when we talk about music, we can say, essentially, “The distance between this note and that note is three centimeters, or is 22 centimeters,” etc.

The unit of measure we use in music is called a half step.

And with most chords (in their basic form), the distance between each of the notes is either three half steps or four half steps. (We’ll cover this in Part two of this series.)

In standard Western music, the smallest interval is the half step. Half steps are also known as minor seconds or semitones – depending on the context. (In more experimental music, there can be smaller intervals – anything imaginable, really. Though we’ll stick with the standard stuff here.)

A half step sounds like the theme music from Jaws:


Or like the two alternating notes at the beginning of Für Elise:

In standard Western music, the distance between two notes can always be defined by how many half steps encompass the distance (the frequency space) between those two notes.

So, half steps are a core building block to understand.

One way to think of a half step is that it’s the difference in pitch between any two piano keys that are right next to each other (or any two nearest notes in standard music) – for example, C to D flat, or E to F, etc.

We can see a few half steps on the piano keyboards below.

Usually, on the piano keyboard, a half step will be the distance between one white key and one black key next to each other: 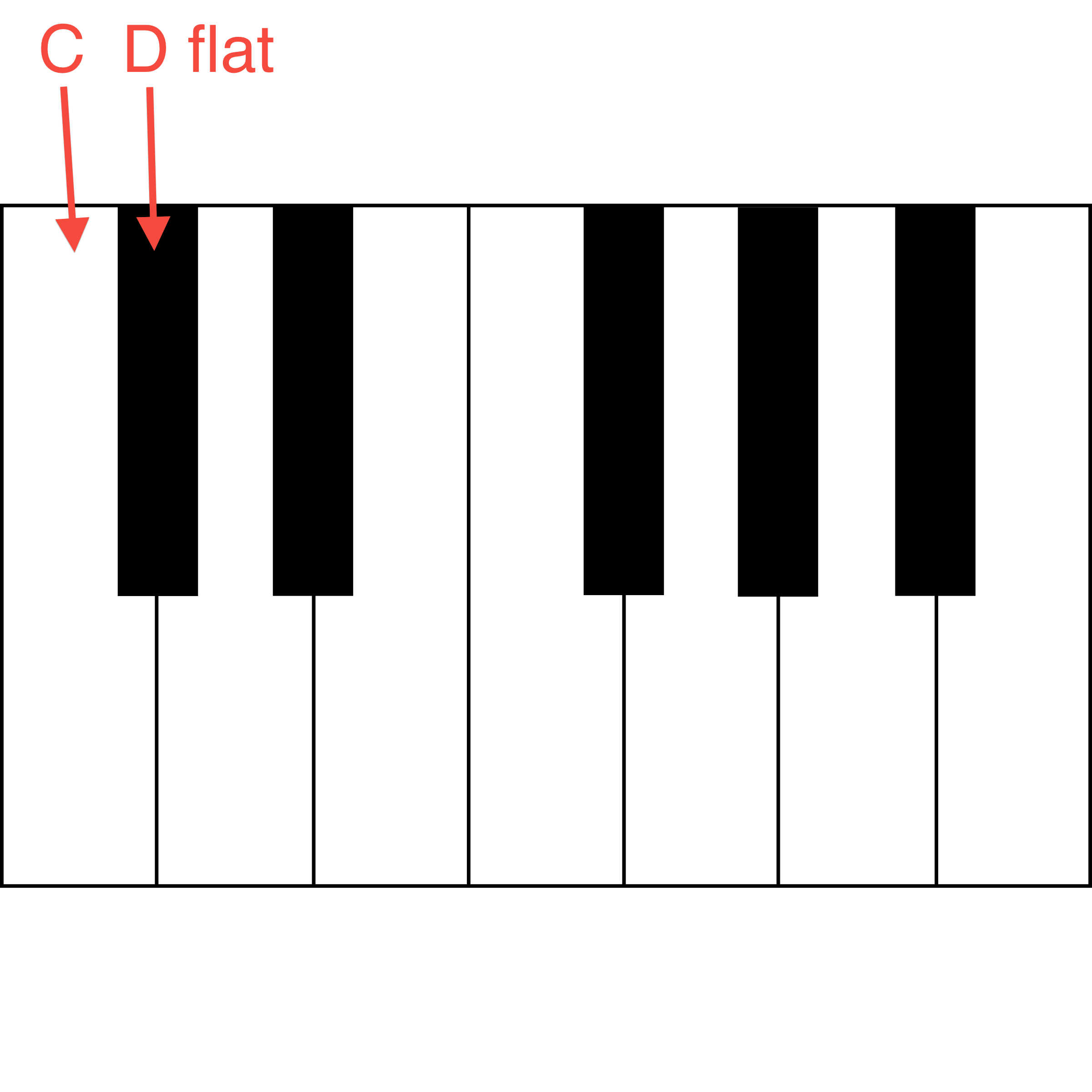 Though there are two notable exceptions – as you can see on the piano keyboard below. There’s no black key between E and F, or between B and C. Those are the two instances where a half step occurs between two white keys: 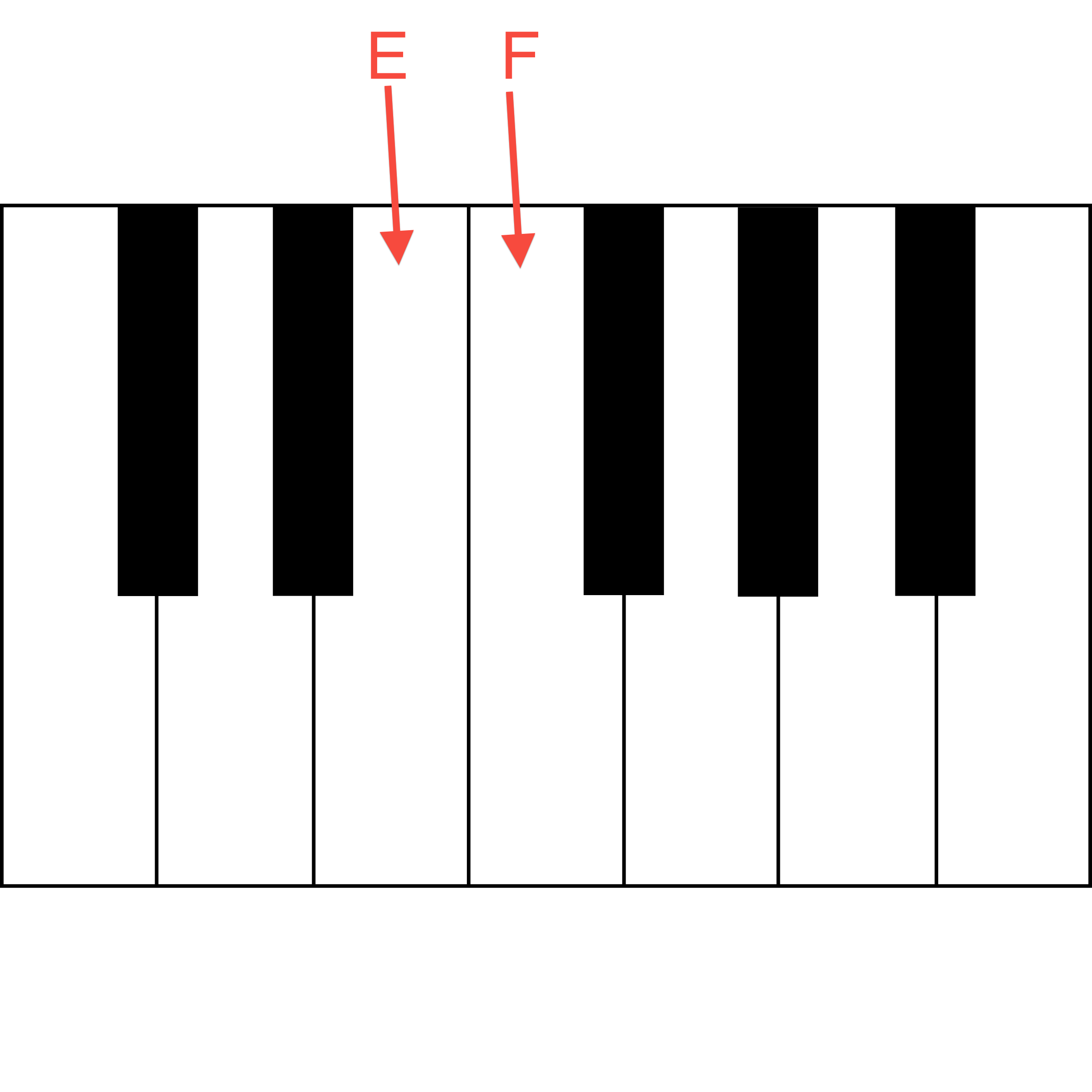 Each interval has its own, unique sound – and its own “look” on the musical staff. And each interval is defined by how many half steps occur between its two notes.

One octave (for example, the note C up to the next note C) encompasses 12 half steps. In music theory, each number of half steps within an octave is given is own designation/name.

For example, a distance of:

… and so on, up to 12. These 12 intervals are known as simple intervals. And intervals larger than an octave (spanning more than 12 half steps) are called compound intervals.

Compound intervals also each have a name correlating to their number of half steps, but they’re less important for our current discussion. So we’ll stick with just the intervals within an octave for now.

And in fact, we can simplify things even more.

The main intervals we want to look at when studying major and minor chords (and augmented, diminished, and seventh chords) are minor thirds, major thirds, and perfect fifths. Here’s some info on each:

Notice below how each interval has its own, recognizable sound.

Minor third
A distance of three half steps between two notes is called a minor third. A minor third can be heard in the first two notes of the song, Hey Jude, by The Beatles. Here’s how it sounds:


Major third
Four half steps between two notes is called a major third. Swing Low, Sweet Chariot starts with a major third: (Can you hear how a major third is one half step wider than a minor third?)

There are 12 half steps (and therefore 12 intervals) within an octave. So far, we’ve looked at four of these intervals (minor seconds, minor thirds, major thirds, and perfect fifths). Further below is a chart that defines and gives info on all 12 of the simple intervals.

A brief aside: Western classical music essentially derives all of its notes by dividing the octave into 12 segments – half steps. Almost all of the music we know is based on this system. It’s good to remember, though, that this is just one possible system of many.

Contemporary music theorists often emphasize that frequency space can be divided in infinite ways. And we see examples of this:

20th-century composer, Harry Partch, for example, often divided the octave into 43 segments. (He had to build his own instruments so his music could be played.)

So what we’re talking about in this article are simply the rules or systems that are used to create the most standard types of notes and chords. And since music is an art, it’s always good to reflect on how, ultimately, there are no set rules. And it’s really about creating music to express ourselves in a meaningful way, and creating sounds that we like.

That’s always a worthwhile caveat when talking about any “rules” in music.

Why are Intervals Named this Way?

If it seems weird/arbitrary why one interval is called a second, another is called a third, and so on, here’s a good way of thinking of it:

An interval of a second spans:

And this system holds true for each interval. For example, an interval of a third spans:

For learning each interval’s sound, we’re often shown a list of recognizable songs, along with what interval is occurring between the first two notes of each song’s melody. (This helps us get to know and recognize the sound of each interval, and even be able to accurately sing them.)

Here are some example songs for each of the 12 simple intervals.

Note: For standard chords, we only really need to look at three intervals:

So, you may want to focus on those intervals below. But I’ll include all of the intervals here – just to give a complete picture.

One weird aside: There are two forms of each interval. Seconds, thirds, sixths, and sevenths can be minor or major. Fourths can be perfect or augmented. And fifths can be diminished or perfect. And an augmented fourth and a diminished fifth are two different names for an interval of six half steps.

As you keep going with theory, you see more of the “why” behind these kinds of details. But for now, you can just know that there are mathematical, and sometimes historical, reasons for most of these things and naming conventions.

Just a quick note on this. Intervals in music occur in two ways:

We’ll be dealing with harmonic intervals as we look at chords.

How Intervals Look on the Staff

Along with being recognizable by its sound, each interval is also recognizable on the musical staff. Here’s how seconds, thirds, fourths, and fifths appear:

Seconds occur on a line and space next to each other on the staff. (Minor seconds can also occur with both notes on the same line or space – if one of the notes is sharped or flatted. But the above is the usual look of a second.)

Thirds can be thought of as “Line to Line” or “Space to Space” – notes on two lines or two spaces next to each other on the staff. They’re easily recognizable. You’ll want to remember how thirds look. These are the building blocks of chords. Fourths will always be one note on a line and one on a space – and a bit wider than a second or third. Fifths look similar to thirds (in that both notes occur on lines or spaces). I like to say, “Line and Line with Line In Between” or “Space and Space with Space In Between.” Note: The outer two notes of major, minor, augmented, and diminished chords span an interval of a fifth. So fifths are the next most important interval to familiarize ourselves with here.

Sixths, sevenths and eighths are less important to recognize on the staff right now – and they’re a bit less recognizable, too. As we continue our series on chords, we’ll focus mainly on thirds and fifths.

Definition: A chord is three or more notes occurring at the same time.

These chords are all built just by stacking up major and minor thirds (in all possible configurations).

We’ll talk more about this in Part 2…

Jump here to take a quick, 12-question quiz on this article. One of the best ways to learn new ideas in music theory is to read info (like on this page), and then to answer questions on the material in some musical examples.

There’s a link to an answer key at the bottom of the quiz. I’d recommend taking the quiz first, and then checking your answers after.

Music theory concepts can be tricky at first (though they usually get really simple once you’ve worked with them a bit). If you have a question, feel free to contact me here. I’m happy to answer a few questions about chords.

If you live in Seattle, I’m also available for private lessons in piano, music theory, and composition. Let me know also if you’d happen to live elsewhere and have an interest in Skype lessons. It’s something I’m just trying out. Feel free to contact me to talk more.