This mix gathers together four songs – representing Flood’s work as a producer with Depeche Mode, PJ Harvey, and Erasure.

There are YouTube videos of each song below – along with links to the music on iTunes and Amazon.

One of Flood’s highest profile clients is U2. He mixed and engineered the U2 song, One, for example. Pretty classic. Flood has worked (mixing, producing, and engineering), often alongside Brian Eno and Daniel Lanois, on most U2 albums beginning with 1987’s The Joshua Tree.

U2’s How to Dismantle an Atomic Bomb won Flood and company a Grammy in 2004 for Album of the Year.

Flood has also worked with a number of bands from Mute Records – including Depeche Mode, Erasure, Nitzer Ebb, and Nick Cave & the Bad Seeds.

And Flood is PJ Harvey’s go-to producer – having produced most of her albums to date.

In 2014, Flood, with regular collaborator, Alan Moulder, received MPG (Music Producers Guild) and BRIT Awards for UK Producers of the Year and Best Producers for their work on the Foals’ Holy Fire (2013).

One of Flood’s production techniques on this song is described in Wikipedia’s entry for Songs of Faith and Devotion – the album this song is from:

The introduction of the track Judas has uilleann pipes recorded with reversed reverberation mixed into the sound, to achieve a haunting, atmospheric feel.

Contemporary spectral composer, Tristan Murail, has played with a similar idea (in a different context). In his piano piece, Territoires de l’oubli (1977), Murail creates what he calls “an imaginary echo.” (Source: The Revolution of Complex Sounds [2005], p. 125.)

As Murail points out, an echo in nature gradually filters out a sound’s partials over time. To simulate a reversed echo, Murail presents a note (imitating a fundamental frequency), and accompanies it – first, with only a few of its partials; next, with more partials; again, with even more; and so on. The technique is shown, in Murail’s hand, on the staves below:

Reprinted from The Revolution of Complex Sounds, p. 126.

PJ Harvey – Written On the Forehead

Written On the Forehead uses two looped samples from the reggae song, Blood & Fire (1970), by Niney the Observer (Winston Holness). Holness was born in Montego Bay, Jamaica; and has worked, since the late ’60s, with reggae musicians like Lee “Scratch” Perry, Dennis Brown, and Freddie McGregor.

Flood used Sontronics microphones to record Let England Shake. From a technical standpoint, Flood says (in this interview) that the album “is the sound of Sontronics.”

For that album we used DELTAs on amps and SIGMAs on Polly and John’s vocals, brass and ambience. ORPHEUS was our go-to-mic for anything and everything: vocals, drums, acoustic guitars, autoharp, ambience and piano.

The DELTA and SIGMA mics are both ribbon microphones. And the ORPHEUS is a condenser microphone.

Ribbon mics were used a lot in the 1930s through ’50s, and are known for their warm sound. 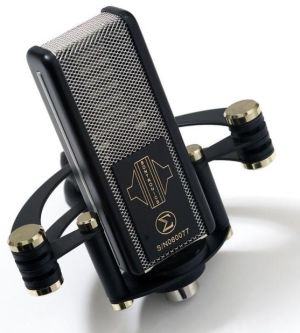 Flood tells an interesting story, on page five of this PDF/interview, about how they processed Polly’s vocals through a series of foot pedals for this song.

The Two Ring Circus is an album of remixes, reworkings, and live recordings of songs from The Circus (1987) and Wonderland (1986).

Flood produced the album with Vince Clarke, Erasure’s founder/songwriter and a founding member (and the original songwriter) of Depeche Mode (and Yaz).

Spiralling is one of three songs on the album which was reworked with an orchestral arrangement. The songs are performed by Erasure singer, Andy Bell, accompanied by orchestra.

Notable English post-minimalist composer, Andrew Poppy, wrote the orchestral arrangements – and they stand out as something unique in Erasure’s usually electronic/dance-themed oeuvre.

If you like Spiralling, you’d probably like all three orchestral arrangements from The Two Ring Circus (and perhaps you already do). The song titles are If I Could, Spiralling, and My Heart… So Blue. On most versions of the album, they’re tracks 8, 9, and 10.

Flood on the Making of Enjoy the Silence

Here is Flood giving a talk at Mute Records‘ Short Circuit Festival at the Roundhouse, London, in 2011. The section of his talk in this video is about making the Depeche Mode song, Enjoy the Silence.

External link: Flood interviewed backstage after the above presentation (also on YouTube)

The talk gives insight into some of the things a producer does. In this case, things like:

It’s nice to see the man behind the work (and particularly fun if you’re into Depeche Mode – his Martin Gore impression is classic 🙂 ).

And this leads us to:

Sign up to receive occasional notifications of my new posts and things.